BondWorld : July saw the worst sell-off on Chinese stock exchanges since 2008. Chinese stocks started to correct in February, spooked by a Beijing crackdown on the regulation of Chinese high-tech companies.

After years of unchecked boom, Beijing is prioritizing stability over growth.

By curbing shadow banking and reducing private sector leverage, China has avoided the bursting of a sub-prime bubble in the property market over the past decade.  On the other hand, by investing in infrastructure, it has continued to support growth.

In January, China’s central bank began regulating the online payments industry, with the stated goal of countering it, in line with government guidelines.

Jack Ma, the Chinese Jeff Besos founder of Alibaba, was forced into „forced retirement“ for daring to criticize Beijing. The ban on the stock market listing of his new creation Ant Group, a giant of online payments, marked the beginning of a tightening by the regime to the monopoly of high-tech giants that Xi Xinping, concerned about the stability of the financial system, wants to reduce.

The centennial of the Chinese Communist Party, July 1, 2021, has catalyzed a reassertion of regime power.

Growing tensions with the U.S., the regime’s barbs have lashed out at new IPOs of Chinese companies in New York, a market that has reached two trillion dollars capitalization. A few days after the listing in NY, the Cyberspace Administration of China, imposed to Didi, the Chinese Uber, a review of its cybersecurity, with consequent collapse of the stock.

Then it was the turn of listed tutoring companies. To reduce social inequality, Chinese authorities want private tutoring of elementary and secondary school students to be conducted on a „nonprofit“ basis, disrupting the outlook for companies in the sector.

Panic on companies like New Oriental Education Technology Group whose stock market capitalization disintegrated in a few sessions after the news. 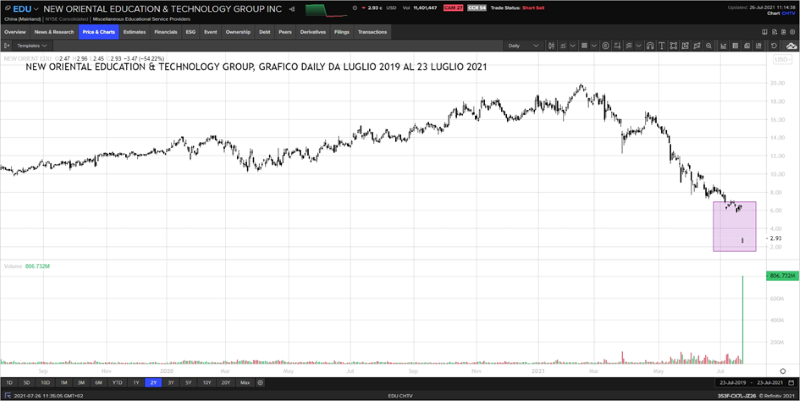 In the last hours, new squeeze on the online gaming sector. Tencent announced new restrictions on the amount of time minors can spend on its online games after pressure from state media that labeled the gaming industry a „spiritual opium.“ The online games business generated the equivalent of $6 billion for Tencent in the first quarter, or 30% of its revenues. The stock lost over 10% intraday and then closed at -6% in today’s session.

The tension of the moment turned the spotlight on an issue that had been sleeping in limbo, that of the legal structures underlying IPOs of Chinese companies listed in New York. By buying a Chinese stock listed in New York, such as Alibaba, Didi or Nio, the investor does not become a shareholder of the company as is normally the case, but a holder of a legal right that simulates the performance of the stock, through variable interest entities (VIEs), off-shore corporate vehicles intended for this. This is to bypass Chinese regulations that would make the investment inaccessible. So far, with economic growth in the tailwind, the Chinese regime has turned a blind eye to the VIE issue, declaring it neither legal nor illegal. Recent developments raise the question mark.

The sell-off on equities has pushed up the prices of government bonds, investors‘ refuge. The yield on the Chinese ten-year bond has fallen from 3.30% to 2.80% since the beginning of the year to date.

The Chinese Renmimbi has strengthened over the past year, benefiting from China’s quick exit from the first phase of the pandemic, China’s growing weight in investors‘ portfolios and a favorable carry trade, compared to currencies such as the euro and dollar with zero rates. The EUR/CNY exchange rate has fallen from the 8.30 area in August 2020 to the 7.60 area today, a decline of about 8% in less than a year.

The combination of Renmimbi and Chinese Treasuries on the highs of the last year suggests a profit taking, with a view to a pull-back, where buyers return.

On the other hand, the recent sell-off on Chinese equities has brought valuations back to attractive multiples. The price-to-earnings ratio of the Hang Seng Index at 13.69 is about half that of the S&P500, you buy at a discount.

Mark Mobius, Emerging Markets guru, in a recent interview with Bloomberg, considers Beijing’s regulatory tightening positive, because it will increase the stability of the system.

The performance differential between Western markets that have risen by double digits since the beginning of the year and Chinese listings in the red in 2021 suggests an easing of US and European equities in favor of China. At this stage, better the Hang Seng in Hong Kong dollars, at a discount to the Renmimbi.

After the emotional shock of the past weeks, from Beijing come the first reassurances to the markets.

Nobody likes to shoot himself in the foot. Least of all the Chinese. It will not be the government hand to prevail on the big web. 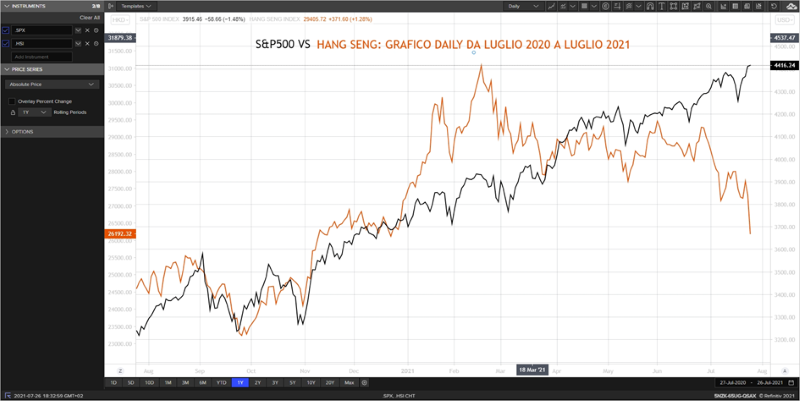